The NFL season is now five weeks in and unusually there is not one team who now has a perfect record. The smart money at this stage of the season is on a Seahawks/Broncos repeat in the SuperBowl, although the impressive Chargers seem to be the most likely to upset the applecart.

Here are my week six picks. 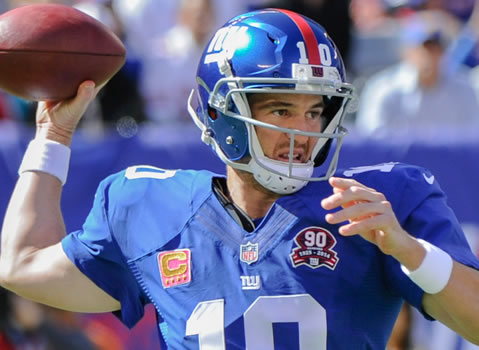 For the second week in a row I’m going to have to go for Eli Manning. With 19/30 passes completed, 2 touchdowns and perhaps most importantly, no interceptions, Manning is looking somewhat solid. His rating for the season is 95.6 (last year it was 69.4) which, if it continues, will be the highest season rating of his career. This week they face the 4-1 Eagles, who despite the great start are 30th in the league in pass defense.

Flacco and the Ravens are having something of a mixed year although won’t be too disappointed being 3-2 after the tough opening five games they have faced. This week they face the Buccaneers in Tampa who are 31st against the pass. Flacco looks value this week in what is probably his best match-up of the season.

Matt Forte has had a great start to the year, rushing for 319 yards and receiving for 299 yards – perhaps the only downside being his single score. This week the Bears face the Falcons who defense is 31st against the rush. Although the most expensive running back in the league this week, you won’t go far wrong in picking him.

Eddie Lacy has had a good start to the year with 266 yards and three touchdowns rushing and 76 yards receiving – his best game coming last time out, with over a hundred yards and two of those scores. After convincing wins against both the Bears and the Vikings, the Packers will be full of confidence going into week six and face the unpredictable Dolphins – although I predict another Packers win.

Greene has rushed for 190 yards and a touchdown so far this year – not exactly stats that inspire confidence. However this week they face the Jaguars at home and it’s almost certain that Greene and the Titans will be seeing plenty of the ball against the worst defense in the league. At $3,000 this could be the value pick of the day.

This is the first of my Quarterback/Wide Receiver combinations this week. Eli Manning and Cruz could put up some big numbers this week with Cruz already catching for 321 yards this season at 15.3 yards per reception. One thing is for sure – the Eagles will give this combination many chances.

Having caught for 463 yards this season Smith sits 4th in the league in this category and also has three touchdowns. The Flacco/Smith combination could be a great one this week against the Buccaneers and this combination is slightly cheaper than the Manning/Cruz combination, although a touch more of a gamble in my book.

Sanders is $1,100 cheaper than his wide receiver counterpart in Demaryius Thomas this week and looks a bit of value here. Sanders has caught for 435 yards and will have plenty of opportunities against the Jets, who looked poor in a 31-0 defeat to the Chargers last week. The only downside is the lack of scoring for Sanders although this could well change this week.

Julius Thomas has scored more touchdowns than any other receiver in the league and is the go to guy in the red zone for Peyton Manning. The 41-20 win over the Cardinals last week was the best game of the season for the Broncos in my book, and we’re now seeing a team that could go all the way (I wasn’t so sure up till now). I wouldn’t necessarily play both Sanders and Thomas this week, although both of them offer value.

The Chargers face the Raiders this week, the Oakland team amassing a total of just 51 points in their first four games of the year – the league’s lowest scorers. The Chargers are full of confidence right now and it’s hard to see how the Raiders will score more than a handful of points in week six.